When we first started running The Pit out of DJs Nightspot in Gosford, it was free entry. Thursday nights had always been notoriously quiet in Gosford – crikey, even most weekends resembled a ghost town – so there were no high expectations and we were on a trial.

The club was packed. That first year was the best we ever saw in five years of running The Pit and it became the place to be every Thursday night. We weren’t the only free venue, but we were the only one that provided that particular music. Free just helped the new night grow and spread that much quicker.

After a year or so, the manager wanted a change. He had noticed that some were coming every week but weren’t buying drinks. He wasn’t making any money off some of the crowd that came through the door and they were enjoying dancing to a DJ he still had to pay. Remember, he’s never made so much money off Thursday nights before, but the thought of some people getting a free ride was too much. 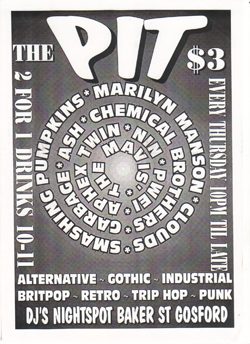 So the manager added a door charge. Two dollars at first, it had grown to five dollars by the end. It might not seem like much, but it was enough to see the crowd start to drift away. Those who would casually come in on a Thursday for a free bit of fun – cashless students and bear-footed hippies – no longer came. And so their friends who had been buying drinks didn’t either. Less people in the club meant less atmosphere and buzz meant less people came back every week and less new people discovered the club.

Placing any obstacle to admission, no matter how trivial, can dramatically reduce numbers. David Meerman Scott talks frequently in books and talks of how Mailer Mailer multiplied downloads of their ebook – The Email Marketing Metrics Report – twenty times, merely by removing the need to enter an email address. That’s right, even entering an email address – significantly less hassle than paying two dollars – is enough to prevent people from accessing your content.

The Mailer Mailer website is now listed at number one in Google for the valuable keyword phrase email marketing metrics, their industry. Now, you can’t tell me there’s no financial return on being the top listing in Google for your industry.

Free is the greatest acquisition tool you can have. Even if you can’t convert a return out of every crowd member you acquire this way, chances are you’re still making more than if you charged a couple of bucks at the door.