But taking the night off and still receiving a pay packet don’t mix either.

I don’t think I ever missed a night in all the years I DJed both in the UK and Australia. At certain periods I was DJing up to three nights a week and holding down a full time job, so there was very little time to be sick. DJing can be a rain, hail or shine type gig, particularly when you’ve carved out that niche for yourself.

Social media is no different. Blogging requires constant attention, otherwise the audience will drift away. Quite often, I find myself forcing myself to produce a couple more posts even though I don’t feel particularly inspired, awake or even well. 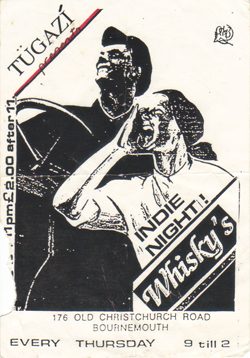 There are many times I’ve DJed dosed up on flu tablets or chomping on Immodium with one eye on the CD countdown and the other on the gents room door. Yet my worst experience of ‘suffering for my art’ dates back to my time working in club in Bournemouth, UK, circa 1990. Whiskey’s was the name of the nightclub, and again I was the Thursday night fixture with a strong local following of goths, rockers, indie shoe-gazers and punks.

So turn up I did. Pump up the volume, flick on the lights, on with the show.

Anyone who has ever suffered a severe headache knows that flashing lights and loud music is like salt on an open wound. My girlfriend at the time (oh god, don’t ask me her name, please don’t…) was the only one to know I was in pain in the DJ box, running to the bar to fetch water for me and giving me pitying looks as I switched the strobes on again.

You might be thinking; couldn’t I just have avoided certain flashy lights or lowered the volume just a little? Sorry, not how it works. The crowd doesn’t know or care how I’m feeling. They’ve paid their money, bought their drinks and are looking for a good night. How can I place my own comfort above a couple of hundred or so others expecting a show of a certain standard? I was being paid to put on the best show that I could and that’s about pride as much as it is about money.

Social media works exactly the same – it is about the audience and not yourself. You can’t switch off when it becomes uncomfortable or inconvenient for you. If a particular social strategy turns negative for whatever reason, you can’t decide to sit it out, only coming back on board when it’s fun and positive again.

Once your social media strategy has created expectations – for example, prompt replies or regular blog posts – you had better be on your death bed to muck around with that schedule. Once lost, it will be much harder to get the crowd back.

How many blogs have one of those posts that are all about “Sorry I haven’t posted much lately. Been ill, work’s been tough, family issues getting in the way. I promise to blog more regularly.” Do readers ever care when reading something like that? Usually, whenever I see a post like that, the blog doesn’t become more regular. If anything it is usually one of the last posts ever to appear on the blog and signals the end – a loss of interest and commitment.

Commitment is the key word here. If you have a social media strategy, either a personal hobby or a business marketing campaign, you need to be able to carry on even when it isn’t fun. You need to push through the pain barrier. You need to deliver and keep delivering. After all, that is the implicit promise you made when you invited others to follow, subscribe, friend, fan or whatever.

So stiffen up. Have a backup plan; some posts in reserve or someone else capable of moderating the Twitter feed or Facebook page seamlessly on your behalf if you fall under a truck. Otherwise grin and bear it, because the show must go on.

Rock DJ Part 2: Free is better than a cover charge