Think being a content marketer is tough? Try convincing an entire nation! Anyone fighting to gain or retain the White House needs to know a thing or two about getting a message across in the most persuasive way possible. And with a relentless news cycle in print, television and radio, plus the newer channels of social, email, apps and more, the choice of media can have a massive impact on that message.

We’re months deep into the USA’s presidential primaries hitting us from all sides with ads and counter ads, debates and press conferences, protests and arguments. And really, really bad hair. Donald Trump’s message may be confused and often incoherent, but he knows how to use each medium to great effect.

Content marketers frequently confuse media with message. So which is more important? What can marketers learn from White House campaigns?

I’m a West Wing tragic and a devoted follower of the “teachings” of White House speech-writer Toby Ziegler. The episode Life on Mars contains a scene that may seem eerily familiar to many content marketers.

TOBY: You think we should run a counter ad.

WILL: We have to.

TOBY: What do you mean?

WILL: What do you mean?

WILL: I came in to show you the spots and to tell you I think we should run a counter ad. I don’t have an idea for one.

TOBY: Well, get one. Have an idea. Don’t come in here with half a thing and not be able to … you know … after you’ve walked me to the brink and say, “We’ve got to do this, it’s important, though I have no earthly idea how.” Like one of those guys who buys a big new thing but doesn’t really know how to get the most out of it!

Sure, his ranting gets the better of his syntax at the end there, but the point is clear.

Too often, marketers plan content driven by a perceived need to do “something” without necessarily having a clear idea to back it up.

“We need a white paper.” “It’s time for another YouTube video.” “Let’s launch a blog because all of our competitors have.” None of these are good enough reasons to do anything if there isn’t a worthy content idea behind it.

This focus on medium over message can waste time, money and resources producing content poorly suited to the channel or weakened by a process that’s upside down.

That’s why there is so much mediocre, uninspiring and repetitive content out there that hardly anyone reads/views. On our frantic marketing treadmills, the motivation to publish something – anything – to tick a particular box can be stronger than the willingness to spend enough time planning and producing something truly exceptional.

This extremely common approach forgets that the medium – e-book, video, blog post, infographic, etc. – is just the container for the content – the idea, information or message. After all, isn’t that what “content” literally means? We want the beans, not the tin they came in.

You’ve got to start with an idea – and a good one!

Yet, while the quality of your content is important, that doesn’t mean any old container will do. Those beans might not be quite as fresh and delicious if they come to us in a paper bag …

… Or Does the Medium Trump the Message?

Marshall McLuhan coined the term “The medium is the message” in his book Understanding Media: The Extensions of Man (1964) to describe how the choice of medium can have significant consequences for how a message is received, interpreted and understood. This is best illustrated by another White House example, this time from the real world.

In 1960, John F Kennedy and Richard Nixon squared off in what was the very first televised presidential debate. Despite television’s ascendancy – 88% of American households had a TV set – many in the audience still tuned in their radios to hear the two candidates present their arguments.

Polled after the debate, the radio and television audiences gave conflicting versions of the outcome. The smaller radio audience overwhelmingly gave the debate to Nixon, while TV watchers plumped for Kennedy as the outright winner. The larger TV audience, therefore, translated into a huge boost to Kennedy’s campaign.

In 2010, Time magazine marked the fiftieth anniversary of the debate with an article that couldn’t overstate the impact this shift in medium had on the presidency:

It’s now common knowledge that without the nation’s first televised debate … Kennedy would never have been president.

Time magazine, How the Nixon-Kennedy Debate Changed the World 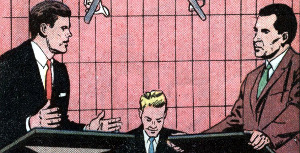 Both broadcasts had included the same arguments, the same ideas, the same content. The only difference was the medium.

On radio, Nixon’s rhetoric was what people expected—firm, resolute, experienced. On television, Nixon looked pale and unwell, following a recent hospitalisation. Under the studio lights, he appeared to be sweating and uncomfortable. Meanwhile, Kennedy looked sharp, handsome, presidential and tanned.

These factors might seem irrelevant when we should be assessing the power of their words. But we never assess words in a vacuum. We take in a wide variety of other signals when interpreting meaning, including body language, tone, facial expressions and other signs. Nixon’s discomfort meant that those who could see these additional signals placed less trust in what he had to say.

On radio, Nixon sounded presidential. On television, he looked like a phoney.

Every medium includes a different mix of additional signals. The layout of a print magazine – such as the font – can influence our interpretation of the message. You wouldn’t undermine a serious message by formatting it in Comic Sans, for example.

How a YouTube video is put together can contain numerous clues that also add to the message: High production values, music and graphics might suggest a confident, big-budget commitment while a simple video shot on an iPhone may indicate a much lower budget but far greater authenticity.

A white paper indicates seriousness and academic rigor (or stultifying boredom depending on your perspective), while an attractive e-book might present the same ideas and information in a less intimidating, more casual manner.

Each of these choices sends signals to the reader/viewer about not only how the brand wants to be seen, but also how they see the audience. Above all, it adds many additional layers of meaning to the content itself – most of which may only exist in the minds of the audience.

Your choice of medium and the format you apply to it should be the best compliment to your ideas and content. They’re equally important. Paying more attention to one over the other will almost always undermine both.