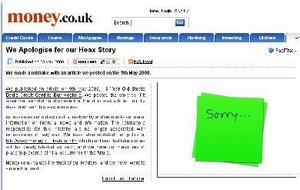 I mentioned early in the debate on one of the myriad threads that no one knows what money.co.uk’s stance on all this is. I suspected for a while that they were unaware of the extent of the fraud perpetrated in their name. This apology goes some way to confirming that suspicion.

The fact that money.co.uk saw this event as a major dent in the trust of their website confirms what a lot of people have been saying over the past few days. As I said only yesterday, hoaxes and lies may gain dividends in the short term, but in the long run inevitably result in a negative backlash. In this case, the search marketer in question has had his reputation dented and lost a contract as well as sending the client website into damage control.

Hopefully, the industry will learn from the mistakes and arrogance demonstrated over the last week and understand that the internet, although free from many restrictions and regulations, is not an invitation for information irresponsibility.

Maybe this will now put the debate to rest and many people will now consider whether ethics do actually have a place in SEM after all.